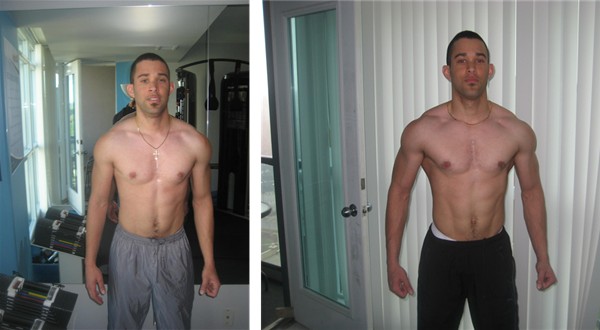 I have always been very athletic but still pretty small. Despite being an avid tennis and softball player I still didn’t fill my t-shirts the way I wanted. So when I signed up with Quiktrain my goal was to put on some decent size but still maintain my athleticism. The other complication was that I was always getting injured which always seemed to put a cramp in my training. When I went to see Derick the first thing he did was identify nutritional and lifestyle goals that would allow my body to support my activity level. The second thing he did was identify and correct imbalances in my body that were causing repetitive injuries. After establishing a good foundation of lifestyle, nutrition and training the muscle came on so easily it was shocking. I could hit the ball significantly farther in softball and in tennis, my movement on the court was much faster and more explosive. With my new confidence I even decided to take up boxing! I can’t tell you how working with Quiktrain has helped me not only physically but mentally. My friends have told me that I walk with an air of confidence that was never there before. I highly recommend Quiktrain to anyone like me who is looking to make a significant impact on their health and life for the better! Thanks Derick!